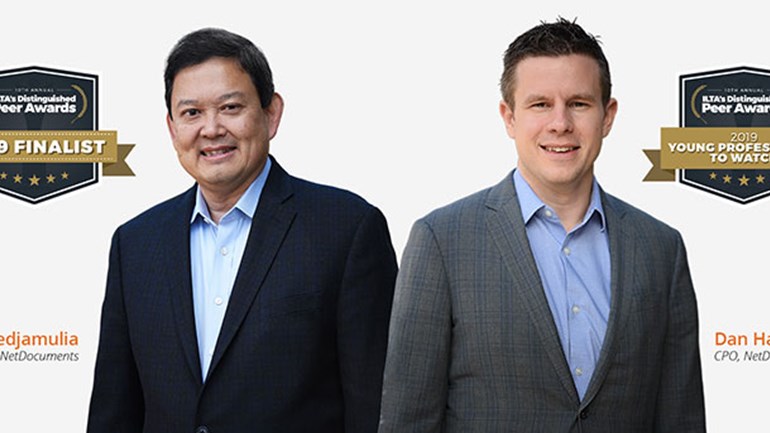 ILTA's Distinguished Peer Awards program recognizes ILTA peers who have delivered great business value and transformational impact through their innovations and implementations or have been champions in specific areas of focus for their organizations.

Over the past 10 years, ILTA has awarded over 140 awards to innovators, solution providers, law firms, legal departments and rising stars of technology professionals who work to support the business and practice of law. In 2019, this includes NetDocuments’ CTO Alvin Tedjamulia, a finalist for “Lifetime Achievement” and Chief Product Officer Dan Hauck, a member of the “Young Professionals to Watch” List.

According to ILTA, The Lifetime Achievement Award is “intended to recognize a career exemplifying the highest standards of personal conduct; a record of fairness and equality, a clear recognition as being a model for others, and a standard-setter in the profession.” Here’s a snippet of Alvin’s impressive application: Alvin Tedjamulia has been innovating legal technology for over 35 years. He began with Time & Billing software for law firms by architecting Comprehensive Law Office (CLO), a technology at the core of Aderant’s practice management software. In 1985, he introduced the first legal Document Management software as part of SoftSolutions, moving DM technology out of the word processing center and into the entire firm. Rapid adoption by thousands of firms worldwide followed, leading to 50% DMS market share, according to Gartner Group research. In the late 1990’s, Alvin and his colleagues envisioned that DMS should transcend the internal boundaries of the firm and extend its services externally to co-counsel and customers, via the native cloud computing model. He’s served as NetDocuments’ CTO ever since. Alvin has been pushing the technology envelope whether via the creation of Document Management API standards or as the founder of Document Management Alliance.

According to ILTA, the inaugural Young Professionals to Watch Award is intended to recognize rising young professionals (under 40) in the legal technology industry, including members, ILTA staff, press, partners, and academics. The application questions are intended to demonstrate the candidate’s achievements, professionalism, and leadership in the legal technology space. Dan Hauck made the prestigious list. Here’s a snapshot of his application: NetDocuments’ Dan Hauck is an attorney who successfully navigated the transition from practicing law at Bryan Cave to building software for legal professionals. Dan burst onto the legal technology scene in 2014 at a LexThink (TED-style) ABA TECHSHOW legal tech event where he had been selected to speak about digitally enabled courthouses. Later that year, he launched ThreadKM, a 'Slack for Legal'-type collaboration application that took the ILTA membership/law firms by storm. His hard work and perseverance did not go unnoticed and in 2016 ThreadKM was named ILTA's Innovative Solution Provider of the Year. A year later, he sold the company to legal cloud market leader NetDocuments and stayed on board, becoming the VP of Product six months later. During that time, under Dan's leadership and product direction, NetDocuments launched ndThread as a new cloud-based collaboration product. He now oversees all product development at NetDocuments.