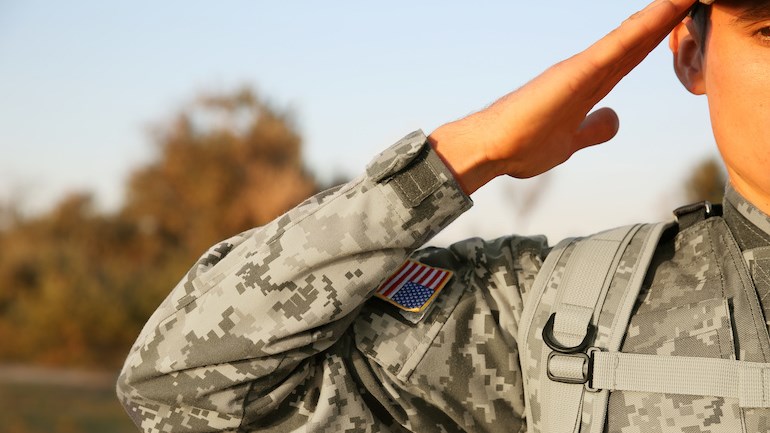 The Patriot Award: How NetDocuments Is Supporting Our Veterans

Last week when Cole O’Neal, Sr. Manager of Global Support and Service at NetDocuments, joined the all-hands company meeting, he was excited to welcome James Miller, Utah Army National Guard Sergeant, back to work after his second deployment. In a surprising turn of events, James was the one who had a surprise for Cole, presenting him with the Patriot Award.

The Patriot Award recognizes leaders for their efforts in supporting citizen warriors before, during, and after service deployments. Many people preparing for deployment are managing multiple stressors including missing their job, leaving their family, making healthcare related appointments, and are simply handling household business and personal priorities. When career or job stress can be minimized it can often help make those other, more personal stressors, less intense and ensure a smoother transition.

We sat down with both James and Cole to learn more about both sides of this engagement: what it’s like to serve in the military while growing your civilian career, and how to lead and support someone on your team who is preparing for a deployment.

James, tell us more about your military background. What made you want to serve?

James: I’m currently a Sergeant in the Utah Army National Guard and have served for the last 12 years. I originally joined to help with college expenses but kept re-enlisting. My last re-enlistment was unique because it placed me at the half-way point of a full 20-year enlistment, opening the door for retirement and other benefits with the Military. After intense consideration, my wife and I decided that retiring with the military would be the best course of action for our family, so I’m looking forward to serving another 8 years with the Utah Army National Guard and developing that career alongside my career at NetDocuments.

What is it like to hear you are up for deployment? What do you do to help alleviate stress from the demands of work, serving, and family-life?

James: This was my second deployment, and although it’s never easy, I knew what to expect this . During my first deployment I was away from a full year and not only missed the birth of my first son, but wasn’t able to meet him in person until he was a little over 8 months. Even though it was difficult then, looking back there are some really incredible memories we were able to make via technology.

Leaving my family is, and always will be by far, the hardest part of every deployment. But you eventually learn how to balance everything accordingly. When I’m with the Military I make sure to prioritize talking with family in addition to spending time with them while I’m home.

Cole, as you had not previously worked with military personnel, how did you approach Miller’s deployment and how did you educate yourself to learn more about the process and what’s entailed?

Cole: From day one James was upfront about his service and how it impacts his life, specifically his schedule. He provided me with his time off well in advance which made it easy for us to schedule around it and be flexible. Just as James was transparent with me, I was too, sharing with him that the process was new to me and we’d work closely with our HR department for guidance and support.

I encourage any manager or leader who has someone in the service on their team to work closely with HR so they can get familiar with the rules and guidelines that will help you support your colleagues in the most impactful ways.

As James’ deployment date approached, how did you two prepare and how did it influence your working style with him?

Cole: James would never directly say it, I sensed an elevated level of stress. From a leadership and human standpoint, I think it’s important for companies and leaders to realize that their colleague is juggling multiple balls that likely feel very fragile. I believe that the more an organization can do to help individuals with the transition on both a personal and professional level, the smoother things will go for everyone.

To help alleviate some of James’ stress, we developed an exit strategy plan about a month prior to him leaving which allowed him to wrap up or delegate any loose ends at work. At the same time, he was trying to prepare his family for his leave, so we did everything we could to be supportive and accommodating, including being flexible with scheduling and offering to help out in any way that would have been meaningful to .

James, what stands out about Cole’s leadership that helped your ability to stay focused at work and during your deployment?

James: Cole’s first response to my upcoming deployment was wondering what NetDocuments needed to do to ensure a smooth exit and return. He immediately wanted to understand what his role was with my deployment, talked to all of the right people, and made sure I had the confidence in knowing that I would absolutely have a job upon my return. I know it wasn’t ideal for him to be down a team member for a period of time, but he only showed support and concern for my wellbeing, and that really helped me feel at ease.

Were there other ways that NetDocuments supported your military career?

James: NetDocuments has always supported my career goals and will never hold my absence against me. I have made enough relationships at NetDocuments that it has always been clear I would have a place to work regardless of my time with the Military.

Cole, James’ career was flourishing before his deployment. What have been key elements in planning for James’ return to ensure he doesn’t lose momentum?

Cole: Prior to James leaving we had multiple career pathing conversations. We had him working in a role that required him to work closely with the groups that he had an interest in moving towards in the future. When we knew he would be returning, the management group discussed and we had the option to have him fill a new role that would allow James to continue to grow while adding value to our support initiatives.

Do you have any other advice to companies, leaders, and colleagues who work with military personnel?

Cole: The individual needs to feel supported, not only by his manager, but by the company at large.  There are multiple times throughout the year where James was away for long weekends or even multi-week trainings. We consciously took time to reassure him that we thought what he was doing was important and we would cover for him while he was away—keeping his focus on that positivity so he didn’t have to worry about work related items while he was gone.

James, do you have any advice for fellow servicemen and women when looking for in an employer that will support their civilian and military careers?

James: Be transparent! It’s important to not be afraid to share information, and be open and honest about your training schedule. Set proper expectations and give plenty of notice for any longer-than-normal training exercises. As soon as I get my schedule for the year, I give that to my manager. This way, it’s never a surprise when I’ll be gone and the company can work with you on your schedule.

We are proud to support each of our veterans in the US, UK, Australia, Canada, and beyond at NetDocuments and strive to create an environment in which they can grow and develop in every aspect of their lives. We are grateful for Cole for furthering that mission through his leadership and especially thankful to Sergeant James Miller for his service. We look forward to watching James further grow his career at NetDocuments for many years to come.

Interested in working with NetDocuments? Take a look at our open positions.